Two highly-successful Sutton schools have been named the country’s best in their categories in the annual Times Education Supplement awards.

Stanley Park High School in Carshalton Beeches was chosen as Secondary School of the Year and The Limes College in central Sutton was named Alternative Provision School of the Year.  The awards were made recently at a ceremony in London.

The TES Schools Awards cover 17 categories, including the best primary school, secondary school, headteacher and healthy school.  They celebrate the extraordinary commitment, quality and innovation shown by teachers and support staff across the UK.

Just over five years ago Sutton’s Liberal Democrat council earmarked substantial funds to convert an old school building into a new college complex for the Limes, allowing it to expand from inadequate buildings on its former tiny site.

The judges agreed that among an impressive shortlist the application from the Limes College was outstanding.  They commented:  “Success rates are high and the college is doing everything possible to help its students, including developing an anti-violence toolkit and establishing a dedicated pastoral support team. There is a lot that is outstanding and unusual here.

“A high proportion of Key Stage 2 and 3 pupils successfully return to mainstream schools, and almost all students in KS4 leave with recognised qualifications and an apprenticeship or sixth-form placement. Ofsted has rated the college as outstanding, singling out the excellent behaviour of students. The focus on re-engaging young people is reflected in an average attendance rate of 74 per cent, compared with 69 per cent for other PRUs.

“This award recognises that the Limes College is a place where young people are able to make a fresh start and build for the future, and where staff truly believe that every student can excel.” 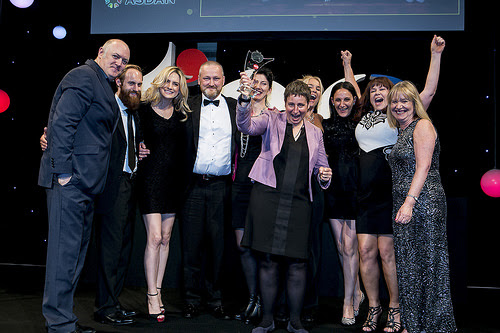 Stanley Park High School, which also moved from a cramped, inadequate site into its present purpose-built school in 2012, was recognised as one of the most improved schools in England.  Judges acknowledged the way “it provides an engaging and rounded education, centred on a broad educational experience that gives young people the skills and knowledge needed to flourish in life, and not just to pass tests”.

In their citation the judges said that Stanley Park High was a non-selective secondary in a highly-selective area and had achieved remarkable outcomes for its student body by focusing on igniting their passion for learning.

It continued: “This is a school with a determined attitude that provides an engaging and rounded education. Its vision centres on a broad educational experience, giving young people the skills and knowledge that they need to flourish in life, not just to pass tests.”

Ann Mroz, Editor of the TES, said: “The creative, ambitious and supportive culture fostered at Stanley Park High make them a very worthy winner of this year’s award.”

Cllr Wendy Mathys, Lib Dem Chair of Sutton Council’s Children, Family and Education Committee, congratulated teachers, support staff, governors, parents and pupils at Stanley Park and The Limes for their achievements.  She said: “Bringing these prestigious awards to Sutton is fantastic and a credit to everyone involved.”

The awards ceremony, attended by 1,000 people, was hosted by television host and comedian Dara Ó Briain. The winners were chosen by a panel of judges including Colin Bell, the chief executive of the Council of British International Schools, Dame Joan McVittie, former headteacher of Woodside High School, Sir Tim Brighouse, former schools commissioner for London, and Colin Hegarty, maths teacher and founder of HegartyMaths.