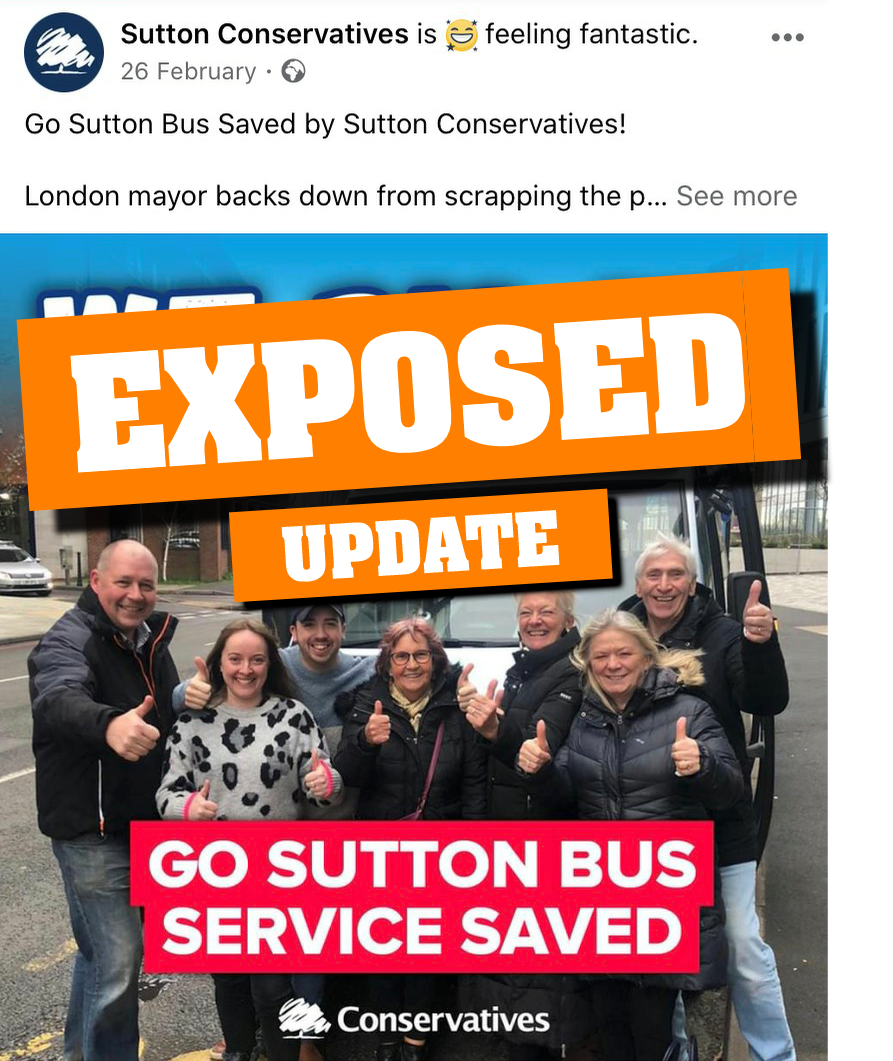 A recent response on the ‘Go Sutton Bus’ from the Tory MP for Carshalton and Wallington has confirmed that the Sutton Conservatives just did not do any work on this issue.

A recent FOI reply from Transport for London (TfL) revealed that none of Sutton’s Tory politicians- MPs Elliot Colburn and Paul Scully, Councillors Tim Crowley, Leader of the Conservative Group, and Neil Garratt, and Assembly Member Steve O’Connell- ever wrote or met with TfL staff on the ‘Go Sutton’ bus before claiming in a Facebook post on 26th February that they had “saved” the bus service.

The Tory MP defended his group’s efforts by claiming that he had sent a physical letter on this matter to Transport for London and made representations in Local Committees and the Public Transport Liaison Group. Interestingly the alleged letter in which he simply asked for clarification on the status of the bus service would have been received by TfL after the Tories claimed to have ‘saved’ the service.

“The response from the Sutton Conservatives to the FOI confirms that they just did not do any campaigning. This is not surprising as the Tories were silent throughout the trial as this was a scheme introduced by the Labour Mayor.

The Sutton Tories' lobbying efforts, before claiming credit for an extension that never happened, amounted to a letter that arrived after they claimed credit for it and raising the issue at a couple of Council meetings.

It’s obvious that securing an extension required a coordinated campaign demonstrating resident support and making the case directly with the London Mayor and the most senior TfL officials. That’s exactly what the Lib Dems did! It's disappointing that the Tories can't do the right thing and apologise to residents."

May 2019 - Cllr Manuel Abellan, Sutton’s lead member on Transport, launches the trial with the Deputy Mayor for Transport Heidi Alexander.

October 2019 - The Sutton Lib Dems launch a campaign calling on the London Mayor to make the ‘Go Sutton’ bus permanent.

October 2019 - Cllr Ruth Dombey, Leader of Sutton Council, writes to the London Mayor asking him to work with us to deliver a permanent ‘Go Sutton’ bus service.

February 2019  - Cllr Ruth Dombey, Leader of Sutton Council, writes to Michael Hurwitz Director of Transport Innovation at Transport for London asking for an extension and to discuss options for a permanent scheme.

February 2020 - TfL’s engagement officer contacts Cllr Manuel Abellan and Cllr Whitehead on the phone and confirms that they are exploring an extension of the service but that this is not yet official and contractual discussions are still ongoing.

24th February 2020 - Tory GLA member asks for an extension in a Mayoral question.

25th February 2020 - Tory MP for Carshalton and Wallington sends a letter to TfL asking for clarification on the status of the ‘Go Sutton’ bus service (Note - Not formally asking for an extension).

*Conservatives claim that some of their backbenchers raised this issue at a few Sutton Council meetings.

TfL's FOI response (March 2020) - A Freedom of Information response from TfL, says “We have not received any correspondence regarding the Go Sutton bus from Councillor Elliot Colburn, Paul Scully MP, Councillor Tim Crowley, Councillor Neil Garratt, or Steve O’Connell during the requested time period (May 2019 to 26th February 2020). Neither have any of the aforementioned had any meetings with TfL staff regarding the Go Sutton bus within the last six months.”