A group of young visitors from western France were the guests of the Sutton Youth Parliament to exchange ideas and plans in a session lasting two days.

The young people, from Saint Martin du Fouilloux near Angers, were visiting Sutton for four days in all, and said their time with the Sutton Youth Parliament members had been instructive and beneficial. The visit was an opportunity for them to discuss what they shared in common, their differences and the lessons they could learn from each other.

During a lunchtime reception at Sutton Youth Centre on Robin Hood Lane on Wednesday 29 July, both groups made presentations about their local governments and explained how they were involved in their local communities.  Among topics covered were the differences between councils in England and France, and how local youth groups could get involved and make a positive impact on their local area.

The session was attended by Liberal Democrat Leader of Sutton Council, Cllr Ruth Dombey, Councillor Wendy Mathys, Lib Dem Chair of the Children, Family and Education Committee, and Lib Dem Councillors Amy Haldane and Manuel Abbelan.  The councillors all shared their expertise with the young people and encouraged them to remain involved in local politics and to make sure their voices were heard. 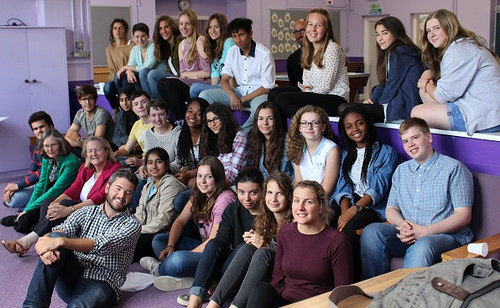 Ethan Smith, lead Youth Parliament member for Sutton, said:  “I really enjoyed meeting the French group and sharing ideas with them. It was fascinating to learn about how their local government helps them as young people. In return, I hope we have given them some great ideas for achieving more for their area by organising themselves and working with local authorities.”

Thomas and Lorette, two of the French visitors, said they were surprised at the large geographical size of the borough and how impressed they were by the Sutton Youth Parliament’s presentation.

Thomas said: “We were welcomed everywhere and so many people were nice and friendly. The work Sutton Council does for young people is really inspiring and we got some great ideas from the Sutton Youth Parliament.”

Cllr Wendy Mathys said:  “It was really encouraging to see members of our Youth Parliament meeting with the French visitors and talking about all the things they share in common.

“It is important that our young people get involved in society and make their voices heard, and here in Sutton we are very fortunate to have a dedicated Youth Parliament whose members have really shown their ability to engage with the community and make brilliant suggestions.

“They will have learned valuable lessons after meeting the French group and I look forward to hearing their ideas about how we can continue making Sutton better for us all.”