Cllr Richard Clifton has been appointed the new Mayor of Sutton. 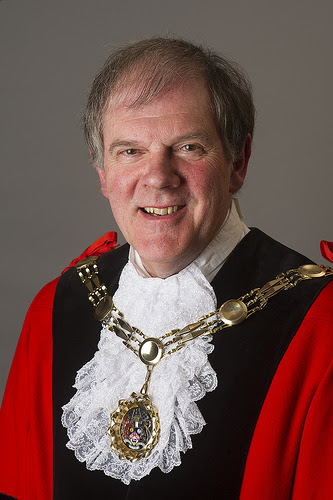 A Liberal Democrat councillor for Sutton South Ward since 2010 and chair of the council’s Planning Committee for the past two years, Richard was elected at the Full Council meeting in the Europa Gallery at Sutton Civic Offices on Monday 23 May.

A retired senior civil servant who specialised for much of his career in occupational safety and was a member of the board of the Health and Safety Executive, Richard has been married for 46 years to Gloria, a retired museum curator.  They have two daughters, Jane and Eleanor, and a grandson, Ciaran.

At the ceremony Cllr Clifton said:  “It is a great honour to be elected Mayor of the borough. This will be the seventh year that I have been a member of this council. In that time I have served under five Mayors, three of whom are currently members of the Council. All of them did the job with great distinction. Gloria and I will do our best to continue in that tradition.”

The Mayor’s two charities for the coming year are the Altzheimer’s Society and Shopmobility. Cllr Clifton called on councillors and those present to take part in at least one of the Mayor’s charity events this coming year to support these worthy organisations.

Cllr Clifton said: “The Altzheimer’s society has a strong presence in Sutton and the council has worked hard on the theme of being a dementia-friendly organisation. I have a personal interest as both of my late parents had severe dementia late in life and were cared for by family members who were greatly helped by the society. And it is the families and carers who often most need most support.

“Shopmobility is probably thought of by many of you as a provider of mobility scooters to help people shop in the town centre, but the organisation has a wider role and outreach to help all those with mobility problems, and there are many in the borough who would be completely housebound without this help.”

Cllr Clifton also thanked the former Mayor, Cllr Muhammad Sadiq, the Mayoress, Aasia Sadiq, and the Deputy Mayor, Cllr Joyce Melican, for their excellent work over the past year.

During his year as Mayor, Cllr Muhammad Sadiq raised £23,000 for his two chosen charities, St Raphael’s Hospice and The Change Foundation, through donations and fundraising activities including quiz nights, musical events and culinary evenings.

In his final speech as Mayor, Cllr Sadiq, said:  “During my Mayoral year I have had the privilege of witnessing the incredible varied talent amongst the youth of Sutton – from the musical talent on display at instrumental music festivals and services, sporting talent during the London Youth Games at Crystal Palace, academic talent such as having Sutton schoolchildren take part in the London Debate Challenge, and rewarding young people for outstanding achievement at the Jack Petchey Sutton School Achievement Awards.

“I have been privileged to witness this tremendous community spirit, talent amongst our youth and have learnt so much about our borough. All in all, this has been an achievement and highlight for me during my Mayoral term.”

For the first time Sutton has two Deputy Mayors – Cllr Nali Patel and Cllr Steve Cook. The new Mayor has appointed as his chaplain the Rev Justine Middlemiss, Team Rector of Sutton Deanery, whose three parishes are St Nicholas Church (which is beside the Sutton Civic Offices), Christ Church and St Barnabas.