The high value that Sutton places on its thousands of unpaid carers has been highlighted during this year’s National Carers’ Week.

The week, which runs until 12 June, has the theme of Building Carer-friendly Communities, to promote communities that support carers to look after their loved ones well, while recognising they are individuals with needs of their own. 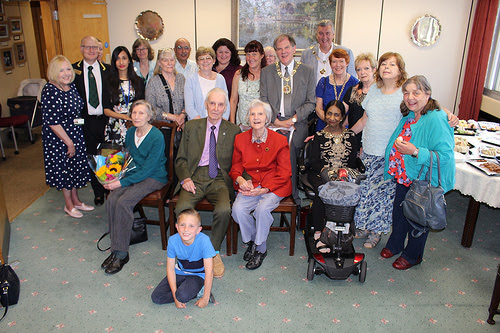 The new Mayor of Sutton, Cllr Richard Clifton, held a lunchtime reception on 6 June for some of the borough’s carers to mark the start of this year’s National Carers’ Week.

In Sutton an estimated 20,000 people juggle their jobs, education and other responsibilities to care for family and friends.  Carers are all ages, from a child or young person helping to care for their mother who has bipolar disorder, parents looking after a child with spina bifida, a working-age adult whose partner has Multiple Sclerosis, or an older person looking after a parent with dementia

Carers make up around 10 per cent of the borough’s population, yet the work they do goes largely unseen and unnoticed.

National Carers’ Week is an annual awareness campaign which takes place to celebrate and recognise the vital contribution made by the UK’s 6.5m carers. It is also a time of intensive local activity with thousands of events for carers across the UK. In 2014 more than 5,000 events took place across the country.

Events in Sutton during the week have included:

Lib Dem Cllr Marlene Heron, Sutton Council’s Adult Carers Champion, said:  “I want to pay tribute to Sutton’s thousands of dedicated unpaid carers who often make tremendous sacrifices to look after some of the most vulnerable people in our community. These dedicated men, women and children are not care workers but work as unpaid carers of their loved ones, who are some of our most vulnerable citizens.

“Sutton Council is working with Sutton Carers’ Centre to reach out to the carers in our community to ensure that their well-being and those they care for is at the heart of what we do with and for them.”

Rachael MacLeod, Chief Executive of Sutton Carers Centre, which is part-funded by Sutton Council, said: “Carers around the country provide more unpaid care than Social Services and NHS combined, an estimated £100 billion-worth of labour each year to keep people healthy and well.

“Such people deserve the recognition, respect and support of the entire community, and we welcome Sutton Council’s help in achieving this.”

Sutton Carers Centre (SCC) is an an independent local charity supporting carers and much of its work is funded by Sutton Council. The SCC website is at www.carers.org/sutton.

The Mayor of Sutton, Cllr Richard Clifton, held a lunchtime reception in Sutton to launch Carers’ Week. He has first-hand experience as his family was responsible for the care of his mother and father when they had severe dementia in later life.

In welcoming the group to the Mayor’s Parlour Cllr Clifton said: “I want to thank all of you for caring for someone and to thank those who work behind the scenes supporting these carers.

“Whether your care is about helping someone discharged from hospital who needs time and support to recover and get back on their feet or a lifelong commitment to a loved one, your efforts are an inspiration to us all.”