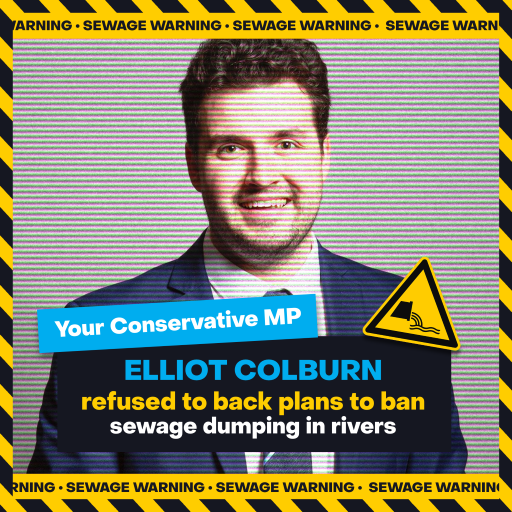 The local Conservative MP for Carshalton and Wallington has been criticised by local campaigners after failing to vote against water companies dumping sewage in local rivers.

Last week MPs voted on Lords amendments to the new Environment Bill, however Conservative voted against the amendment, and Carshalton and Wallington's Conservative MP Elliot Colburn failed to turn up to a vote against an amendment which would have banned water companies polluting rivers with sewage. Next week, there will be another opportunity for MPs to vote to protect local rivers.

In Carshalton and Wallington, the River Wandle has been damaged by sewage, which is dumped into the tributaries that feed it.

'Elliot Colburn seems to be more bothered with keeping his boss happy than looking after people in Carshalton and Wallington.

'Why would anyone living here not take the chance to stop raw sewage being pumped in the Wandle and our waterways?

'I walk my dog here. I see kids paddling and playing in the Wandle. It should be safe for swimming, fishing and sustaining wildlife. Yet now they are at risk at being filled with raw sewage and human waste which will destroy them for decades to come.

'I am proud Liberal Democrats in Parliament are leading the fight to protect our local rivers and urge Elliot Colburn MP to change his mind ahead of the crucial next vote. We have just one more opportunity to save our rivers and I call on Conservative MPs to do the right thing for our local environment.'