REVEALED: Carshalton & Wallington MP never wrote to TfL over bus service he claimed ‘to have saved’ 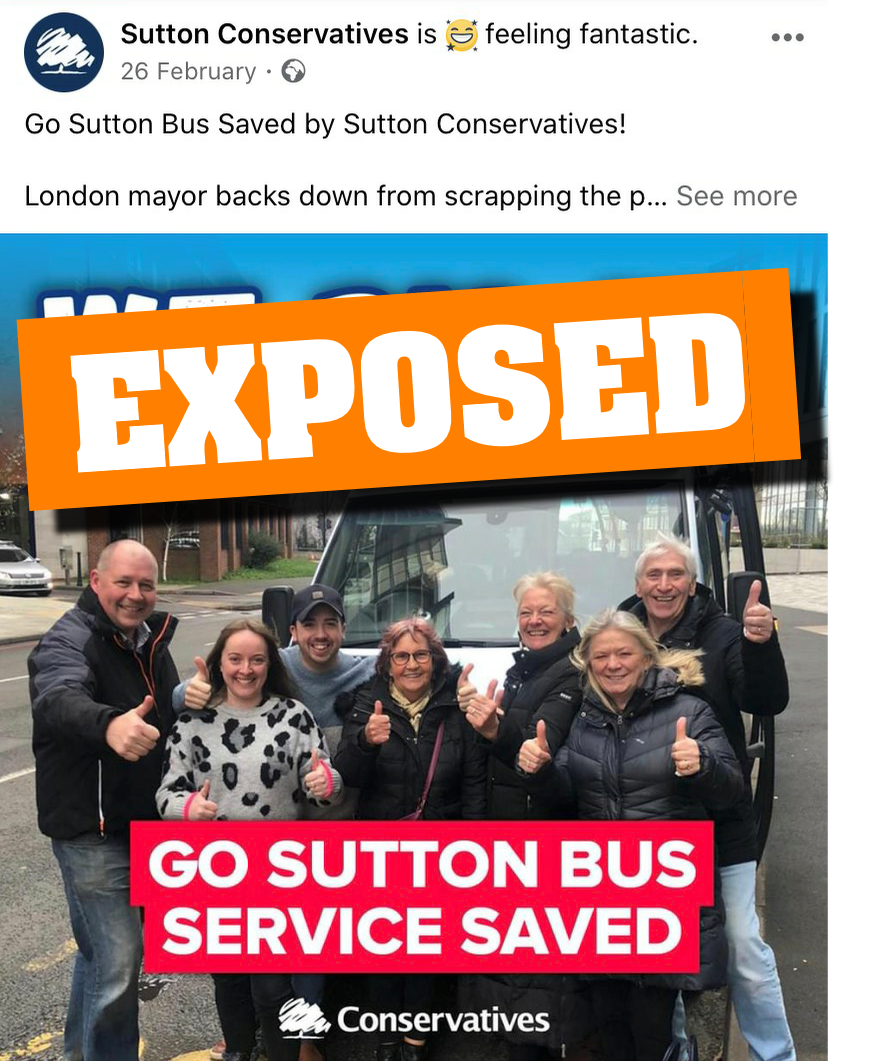 Last week saw Conservative MP Elliot Colburn claiming to champion the Go Sutton bus service- but a Freedom of Information request has revealed he’s never written to TfL or met with TfL officials on the matter.

The Go Sutton bus pilot began in May 2019 and was an on-demand scheme which picked up residents close to where they live and took them to any destination across most of the borough. The pilot scheme was due to end in May 2020.

The scheme proved widely popular and was due to be extended after Sutton’s Lib Dem councillors ran a long campaign gathering support from nearly 2,000 residents and actively lobbying TfL and the London Mayor.

In fact, TfL has revealed that none of Sutton’s Tory politicians- MPs Elliot Colburn and Paul Scully, Councillors Tim Crowley, Leader of the Conservative Group, and Neil Garratt, and Assembly Member Steve O’Connell- ever wrote or met with TfL staff on this matter before claiming they’d “saved” the bus.

“Thanks to consistent lobbying from our local Conservative councillors, new Conservative MPs and Conservative GLA representative, the trial period has now been extended”, claimed MP Elliot Colburn on 26th February - despite TfL later revealing, as above, that Colburn had never spoken or written to them. Colburn also used a parliamentary debate last week to claim his support for the bus despite never having lobbied for it.

Conservative councillor Neil Garratt also claimed to have “raised this in City Hall”, despite TfL revealing he had never written or spoken to them about it.

“TfL’s extraordinary revelation is a kick in the teeth to thousands of residents who have relied on the Go Sutton Bus and want it to be made permanent. The Sutton Tories have two MPs, a GLA Assembly member, 18 local Councillors and yet they could not be bothered to do any work.

It’s also hugely disappointing that the new Tory MP for Carshalton and Wallington has been caught out trying to mislead local residents. Unfortunately for Sutton’s Tory politicians, TfL are required to keep official records of who writes to them and who they meet.

The Lib Dems will continue to mobilise support and actively lobby the Mayor and the Government to improve our bus and train services, make the Go Sutton Bus permanent, bring the Tram to Sutton and invest to make our streets greener and safer.”

The published FOI request is as follows:

"Thank you for your request asking for information about the GoSutton bus service.

Your request has been considered in accordance with the requirements of the Freedom of Information Act and our information access policy. I can confirm we hold some of the information you require.

There has been one phone conversations between our Stakeholder Engagement team with each office of Councillor Colburn, Paul Scully, and Steve O’Connell during this time.

If this is not the information you are looking for please feel free to contact me.

Please note the Government has announced a series of measures to tackle the coronavirus. It is essential for London, and in particular for all critical workers, that we continue to provide a safe transport network that enables them to make the journeys they need to.

In current circumstances, we are not able to answer FOI requests readily and we ask that you please do not make a request to us at present.

Answering FOI requests will require the use of limited resources and the attention of staff who could be supporting other essential activity. In any event, please note that our response time will be affected by the current situation.

Please see the attached information sheet for details of your right to appeal."