Sutton Council is considering issuing body cameras to its lollipop staff following a number of “drive-through” incidents and verbal abuse from drivers at school crossings across the borough.

In Hackbridge there have been 80 “drive-through” incidents in the past month where drivers ignored the lollipop man and did not stop when he stood in the road to allow children to cross safely.  He also reported six incidents of verbal abuse from drivers.

“I do a very important job as the safety of children is at stake. It is unpleasant to be ignored by drivers, and it is unacceptable that on occasions I have been sworn at by drivers within earshot of the children.

“In the past month alone I have experienced dozens of drivers failing to stop when I stand in the middle of the road. Such reckless behaviour has real safety implications for the children. Most people are lovely but this minority of drivers is putting children’s lives at risk.”

Mr Dillon has worked as a lollipop man in Hackbridge since last September, and believes that some drivers ignore him as they do not see him as an authority figure and are happy to break the speed limit for the area.

He says:  “They think they don’t have to stop because I’m not a policeman. On occasion some drivers pass the school in excess of 35 or 40mph.”

This is in spite of clear statements in the Highway Code (see below) that motorists must drive very slowly near schools, be particularly aware of young pedestrians and that they must stop when a lollipop person shows a ‘Stop for Children’ sign. 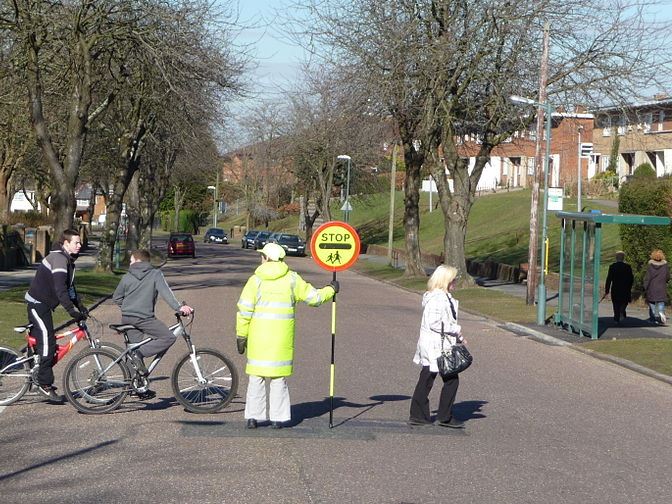 Tracey Collins, a Hackbridge resident and road safety campaigner who has witnessed drive-through incidents outside the school, said:  "It is disgraceful that some motorists in the borough are deliberately ignoring lollipop men and women when they are doing their job to ensure that children cross the road safely to school. That some are even being abusive as well is appalling.

“Such reckless behaviour is unacceptable as it could put children at risk of injury or worse. All drivers should be careful and keep to the speed limit when travelling past a school."

She said:  “As a council we are looking seriously at providing our lollipop men and women with body cameras to deter unacceptable and abusive behaviour so they can record any such incidents. We would also remind drivers that they must obey the Highway Code and drive slowly when passing schools in the borough.”

DO NOT overtake where you might come into conflict with other road users. For example

Near schools. Drive slowly and be particularly aware of young cyclists and pedestrians. In some places, there may be a flashing amber signal below the ‘School’ warning sign which tells you that there may be children crossing the road ahead. Drive very slowly until you are clear of the area.

You MUST stop when a school crossing patrol shows a ‘Stop for children’ sign.