Ruth Dombey, Liberal Democrat Leader of Sutton Council, has been awarded an Order of the British Empire (OBE) for services to Local Government and London in the Queen’s Birthday Honours List.

Cllr Dombey, who has been Leader since 2012 and a Sutton councillor since 2002, said: “This is a great honour – I’m really pleased. It’s a recognition for everyone in Sutton who is working so hard to provide vital council services.

“Our borough is a wonderful place to live, work and bring up a family – I’m honoured to be part of it.”

Ruth Dombey studied politics and economics at university, then travelled and lived in Italy for 19 years working in the financial sector. On returning to the UK she moved to Sutton and in 1999 began to work part-time as caseworker for Lib Dem MP Paul Burstow.

In 2002 Ruth was elected a councillor for Sutton North and by 2010 was Deputy Leader of the Council. She became Leader in 2012, succeeding Sean Brennan.

Ruth chairs Sutton Council’s Strategy and Resources Committee, its Health and Wellbeing Board and the Safer Sutton Partnership Board. She is a Board Member of the London Cancer Hub Partnership Board and is leading the Area Review of Post-16 Education and Training colleges.

In 2014-15 Ruth Dombey earned a place in the 100 most influential people in local government as compiled by the Local Government Chronicle and judged by leading thinkers in the sector.

In recent years Cllr Dombey has played a number of leading roles regionally and nationally in the sector. She is currently Vice-Chair of London Councils, the body representing the 32 local authorities in the capital and is Vice-Chair of the South London Partnership.

Under Ruth Dombey’s leadership Sutton has adopted a distinctive approach to economic development focused on local skills programmes, proactively engaging business and enterprise to encourage development, building the council’s role in housing development and asset management, and developing innovative projects such as a decentralised energy network and district regeneration.

Cllr Ruth Dombey has also championed the Council’s vision for the London Cancer Hub – working in partnership with the internationally renowned Royal Marsden Hospital and Institute for Cancer Research – to establish an international centre of life science expertise, research and treatment whilst bringing in thousands of new jobs to the area, skills development, and infrastructure investment to benefit local people. 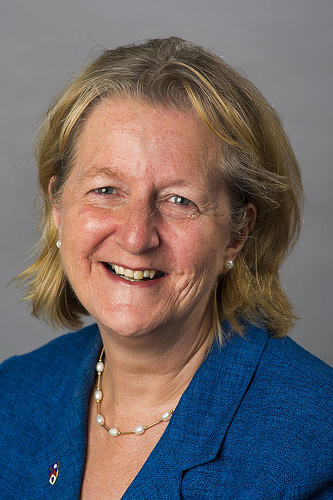