Now the council is calling for nominations for candidates for the 2016 UK Youth Parliament.  Applicants need to be between 14 and 16 and passionate about local and national issues, and how they affect other people of the same age.  Successful candidates will represent Sutton on the national scene by attending British Youth Council events.

Current UK Youth Parliament Member Ethan Smith, of Stanley Park High School, and his deputy Daigan Red, of Wilson’s School, said they would encourage any passionate young person to get involved.  There is also the opportunity to directly influence Sutton Council decisions as part of its own Sutton Youth Parliament group.

The two politically-minded 17-year-olds, together with the rest of the Sutton Youth Parliament, have already made some big changes in the borough this year. 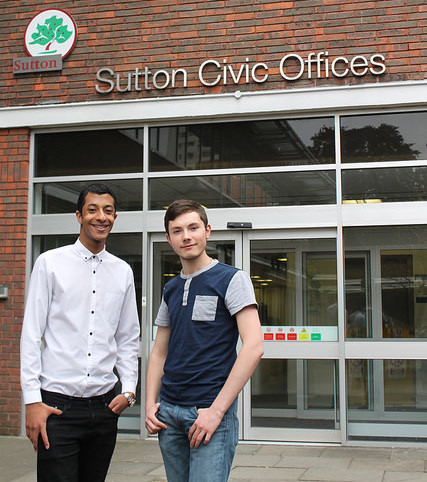 Ethan’s pledge to have councillor visits in schools across Sutton will soon become reality.  This means that young people can make the issues which affect them known to council members.  He has also worked closely with Volunteer Centre Sutton to make sure young people who, like him, have had challenging backgrounds can get the mentoring and support they need.

This year, the Sutton Youth Parliament has also organised a youth celebration event where outstanding local young people were formally rewarded for their contributions to the community, as well as the Sutton Youth Summit, where pupils from schools across the borough assisted the council and its key partners tackle issues ranging from bullying to equalities.

Of his time in parliament so far, Ethan said:  “The way I see it the Youth Parliament is a doorway leading to more opportunities. Every young person has choices about which door they should go through. There are different career choices and maybe some doors won’t lead to a career at all, but going into the Youth Parliament opens many doors… into the council, into politics, even into things like business management. It’s great for the CV as well and will give you so much experience.

“As the Sutton Youth Parliament Member, I see myself as a kind of personal advisor to the council.”

Daigan added:  “The thing that is really good is that members of the council actually want to listen to us and hear our views. A lot of people do reach out to us and it is our responsibility to make sure those voices are heard.

Cllr Wendy Mathys, Lib Dem Chair of Sutton Council’s Children, Family and Education Committee, said:  “Young people are of course the future of our borough, so we want and need them to get involved in shaping it.  It’s been inspiring to watch Ethan, Daigan and all the members of the Sutton Youth Parliament get truly involved with the council, offering thoughtfulness and maturity beyond their years. What a fantastic job they’ve done.

“I would encourage any young person to nominate themselves for next year’s parliament, as we continue to work towards making practical changes to make Sutton a better place for our young people.”

Members of the youth parliament need to commit to regular training and meetings. nThey will be rewarded with many new skills such as public speaking, leadership, project management, budget management, knowledge of democratic processes and team work.

Nominations close on 30 June. To lodge a nomination or for more information, email Lee at Sutton Integrated Youth Services on lee.ocsko@sutton.gov.uk

There is also more information and a flyer on the youth service website.