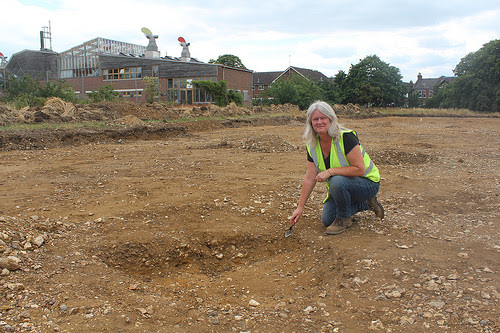 Sutton Council commissioned the archaeological dig following a study which identified the site as that of a possible Bronze Age settlement. This meant that legally the work had to be undertaken before building could commence on the new school next year.

Archaeologists from the AOC Archaeology Group spent four weeks excavating a rectangular area of around 1.7 hectares.  The work followed up an archaeological dig in the 1990s on land to the south of the site at Wandle Meadows, now the BedZED site, which found evidence of a large-scale, well-organised Bronze Age settlement.

Archaeologist Les Capon, project officer at AOC Archaeology, described the findings:  “We think we can date this site to either the Stone Age or Bronze Age.

“The lack of any modern, mass-produced or Roman artefacts indicates that the site may be 4,000 years old. Given that some of the artefacts found on the BedZed site next door firmly dated it to the Bronze Age, I think by association we have to say that this is part of the same kind of prehistoric landscape of fields established during the Bronze Age, with people living in small settlements such as family groups tending a farm.

“There may have been a small community of two or three families but we can’t prove they were living directly on the school site. Without evidence of a house on our site here or any dating evidence it’s more deductive reasoning than proof.

“The evidence may live a couple of metres to the east or north just outside the area we are digging in.”

However, the archaeologists have uncovered one mystery during their month on the Hackbridge site.

Mr Capon said:  “Someone has dug a big pit in the middle of the site in the past 10 years and backfilled it with rubble, including a wrapper from an almond Mars bar. It is an obvious modern intrusion.”

Cllr Jill Whitehead, Liberal Democrat Chair of the Neighbourhoods and Environment Committee at Sutton Council, said:  “The archaeologists have worked extremely hard during their time at the Hackbridge site. It seems clear that a small community of two or three families lived here some 4,000 years ago and that the land was used for agricultural purposes as shown by evidence of stone ditches and areas where animals were kept.”

Following the dig a group of Year 3 schoolchildren from Hackbridge Primary School were given a guided tour of the site.  This followed on neatly from their recent project on the Stone Age and Bronze Age.

Construction on the site of new primary school is expected to start in April 2016, with the school opening in September 2017.